Influence of the golden point rule in professional padel 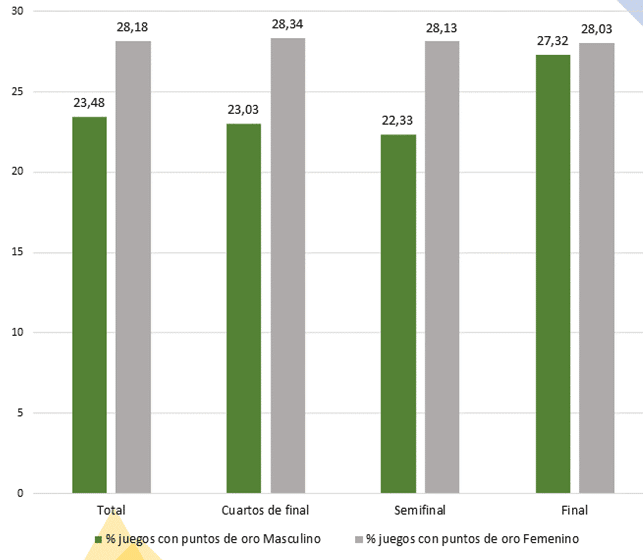 The expansion of padel

The golden point in the World Padel Tour

Padel is a sport in continuous evolution, proof of this are the changes that are taking place in the rules, to make it more attractive to the practitioner, public, companies and televisions.

From the 2019-2020 season, the World Padel Tour professional circuit has incorporated the “golden point” rule into its competitions, according to which, when both pairs win three points in a game, reaching a score of 40-40, a decisive point will be played, called the “golden point”.

The receiving partner chooses whether to receive the service from the right or left side of the court. The members of the returning pair may not change position to receive this decisive point.

“The pair that wins the deciding point wins the game (International Padel Federation, 2021)”.

Currently, one in three games in women’s padel and one in four games in men’s padel are decided on golden point (Muñoz et al., 2022).

In addition, the percentage of games that are decided on golden point seems to increase in the third set in girls, which reveals the importance of these points in the game.

In this article we will review how the golden point rule may be influencing the game, and even what differences there may be between winning and losing pairs in both men’s and women’s padel.

It seems that the inclusion of this rule could be aimed at limiting the length of matches and thus favouring the broadcasting of matches, and perhaps a better control of schedules.

A study carried out by Sánchez-Alcaraz and other researchers in 2020 found only slight reductions in set length (3 minutes less).

However, they did observe a higher number of breaks and more even sets in relation to the score, i.e. more games played.

Perhaps the incorporation of this rule has not been able to reduce the length of the matches, but it has, however, managed to increase equality, allowing theoretically inferior pairs to surprise and make matches more difficult for other pairs of great quality.

Most of the emerging studies on the effects of incorporating the golden point rule are very recent.

Specifically, Muñoz et al. (2022), analysed the influence of the golden point on performance in professional padel, and the possible differences between winners and losers, as well as between sexes, rounds of play and sets.

These authors observed increases in the number of games and breaks made, suggesting greater equality in sets and matches, and concluded that winning pairs score more golden points than losing pairs over the course of the match, especially in women’s padel.

Another important aspect to bear in mind when training with players is to prepare very well the tactical aspects of this golden point, which could tip the balance in our favour at key moments.

In men’s padel, golden points also seem to have an influence on the result, but fewer of them are disputed, perhaps because of the more offensive characteristics when they serve and their great ability to define with the smash.

Another study that analyses the differences between the actions of finishing points according to their importance within the game has determined that the percentage of winning strokes in men’s padel decreases as the importance of the points increases during each game, however, the percentage of errors increases, reaching 61.5% of errors in the last strokes of the point when a golden point is played (Escudero et al., 2022).

It could be that in the women’s category they opt for a more conservative game, waiting for a good moment to make a winner.

There are some preliminary studies on the equality or dispute of golden points depending on the rounds of play. Thus, it has been observed that, in the men’s category, the quarter-final matches seem to be more demanding in terms of volume of play (number of games).

The number of games in each set can give us information about the equality of the score of the set, but we do not know what is happening in each game, as it is not the same to be playing games with 4 points (40-0 and 40-15), as games with 6 or 7 points (40-30 and golden point).

This information could be obtained from the number of golden points disputed.

As we can see in figure 1, in women’s padel, more than a third of the games in the first set of the final end in a golden point, while the average number of games is not among the highest.

The second set of the finals is usually a little more decaffeinated, it seems that the score of the first set affects a lot in one of the 2 couples.

The most interesting happens during the third sets. In the quarter-finals, where most games are played, only 1 out of 4 games end with a golden point. However, in the semi-finals and finals, it seems that golden points are decisive.

Furthermore, looking at the percentage of golden points played and the number of games per set it seems that the winners manage to make the difference in these golden points.

“Sometimes the equality in the score of the set and the game do not coincide, being the golden points a very important aspect that allows some couples to get more distance on the scoreboard, and not so in the game”.

Figure 2.- Average number of golden points played per round

In addition, figure 3 shows that the percentage of games with golden points in all rounds is higher in the female category, however, fewer games are played in the semi-finals and final, indicating that the winners tend to win more golden points in this category than the losers.

For boys, the existence of fewer golden points could indicate a greater advantage of the services, which leads to longer set lengths in terms of games.

According to the data, the boys’ finals tend to be the most evenly matched, not only in terms of the number of games, but also in terms of golden points played and the % of games where golden points are disputed. However, in girls, the quarter finals are the most hotly disputed.

Figure 3.- Percentage of games with golden points per round.

This data can have a great relevance and practical application for coaches and players, from the point of view of match preparation and key moments, and emphasis should be placed on these golden points, which can determine the final result of the set or match, both in the men’s and women’s categories.

Efficiency of Strokes in professional padel. Winners Vs...

Analysis of the return in professional padel

Which are the most used rackets in amateur...

Time structure of padel and its application in...

Analysis of the serve in professional padel. Aplication...